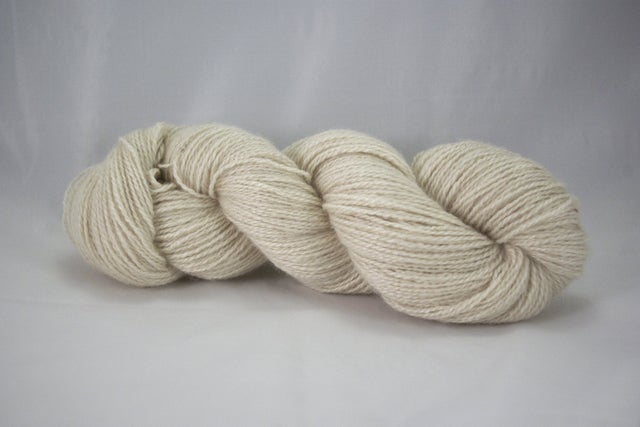 Handspun, hand-dyed cashgora yarn. Spun and dyed by a women's co-operative in Tajikistan. The cashgora is raised by farmers in the Pamir mountains in the southern part of the country. The goats are combed and the fiber is sent to be washed and de-haired in Afghanistan. The fiber is then distributed to the spinners in seven different villages in Tajikistan - three in the north and four in the south.

Cashgora refers to goats that are a crossbreed of Angora (mohair) and cashmere-producing goats. The resulting fiber produces a yarn with the best qualities of each goat breed - the strength and shine from Angora and the softness of cashmere. Though technically not as fine as cashmere, cashgora ranges between 18 and 23 microns, similar to the softness of Merino wool. This yarn is durable, less prone to pilling than cashmere, and gets high marks for drape in your finished product.

The cashgora fiber is harvested from goats produced by villagers in the Pamir Mountains of Eastern Tajikistan. Cashgora goats were developed by crossbreeding Russian fiber goats and local cashmere-type goats. They produce a slightly coarser and longer fiber compared to cashmere (approximately 17-21 micron). Cashgora is a renewable resource – it protects the goat during winter but is no longer needed in the spring. Women comb their goats in April and sell the fiber. The average yield is approximately 400 grams or 14 ounces of combed fiber per goat. (For comparison, an average Merino sheep produces around 4-5 kg of wool). Prior to our project, all cashgora fiber produced in the Tajik Pamirs was sold to China. Now a portion of it is purchased by the spinning groups for better prices, benefiting the local producers. The fiber is then sent for dehairing to Herat, Afghanistan. During the dehairing process, the coarse guard hair is separated from the fine down. Clean cashgora comes out of the dehairing machine as a featherweight cloud. It is shipped back to Tajikistan and spun into luxurious yarn by local spinners. They also dye the yarn using American-made dyes and ship it to PortFiber in the United States.

Sold out
Add to Cart