First up - this isn't a possum. 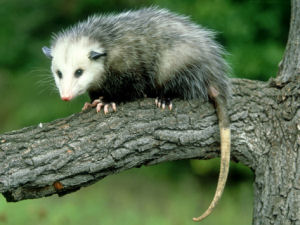 That's an opossum from the northern hemisphere.
This is a brushtail possum and they are originally from Australia. 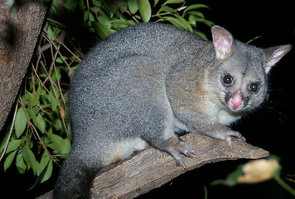 I'm sure you've seen the possum photos where they look all cute and cuddly like this but,
if you come face to face with one they're probably more likely to give you this face - they are fierce! 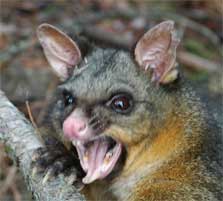 So, apart from the fact that they're not very friendly,
why do we use possum fur in our yarn and how can we claim to be supporting animal welfare?

​Brushtail possums are actually a serious pest in New Zealand and major threat to our environment and endangered bird life.
Here’s an official blurb I found that explains it:

“The brushtail possum is an introduced species released in NZ in 1837 to establish a fur industry.

As demand for fur fell and its value dropped to uneconomic levels the numbers of possums dramatically increased.
They have now reached epidemic proportions with well over 70 million possums munching their way through
21,300 tonnes of vegetation nightly, decimating New Zealand’s native bush and birdlife.

With no predators, New Zealand’s bush is defenceless against possums. Possums are a serious threat that has spread
to 92% of New Zealand’s three main islands and, with their habitat destroyed by the possum,
many native trees,  plants and birdlife, including the kiwi, are under threat of extinction.

The only way that we can get the possum numbers down to manageable levels is by marketing possum
products worldwide and getting people who care about the environment to purchase these products.
Only then, will it become financially viable for hunters to trap the possum, reduce their numbers,
and help save New Zealand’s environment.”

I understand some people have reservations about animals being culled.
I wouldn’t be keen on yarn that had come from an animal killed just for it’s fur.

The big difference for me with regard to possum yarn is that these animals would be culled even if their fur was horrible.

Because possums are an introduced pest in NZ and with no predators here (our largest native land mammal is a tiny bat)
they are a serious threat to our ecosystem. The damage to native forests can be seen all too clearly in many areas.
In some areas they have eaten whole canopies of native trees. They compete with native birds for habitat and for food
such as insects and berries. They also disturb nesting birds, eat their eggs and chicks.

I know they can look quite cute and cuddly in photos but the destruction they cause in our
native forests is truly devastating. I’m all for animal rights and if there was a way of
boxing up all however many million of them and returning them to Australia then I’d be all for it.
As it is, culling is the only way to try to control them so for that reason I feel that
it’s actually better to put the fur to good use rather than just destroying it.


I know this is an unpleasant subject and it's often difficult for people from other countries
to understand the level of destruction that possums cause here in NZ.
I'm always willing to discuss any concerns you may have regarding this
so if you have further questions, please feel free to email me.